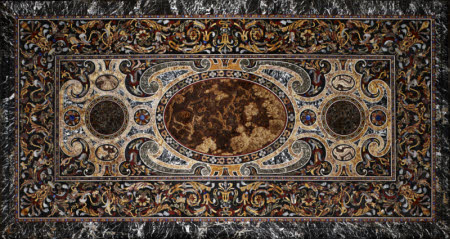 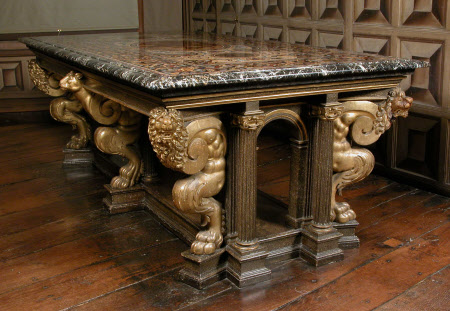 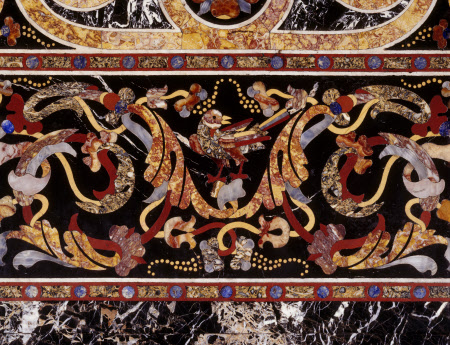 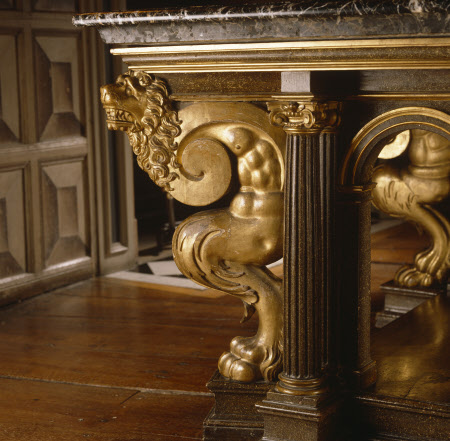 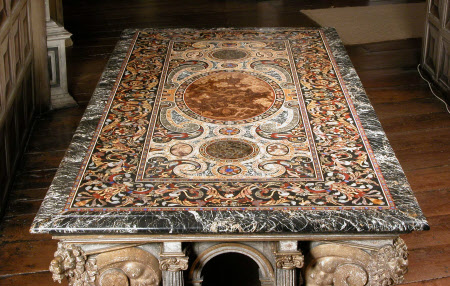 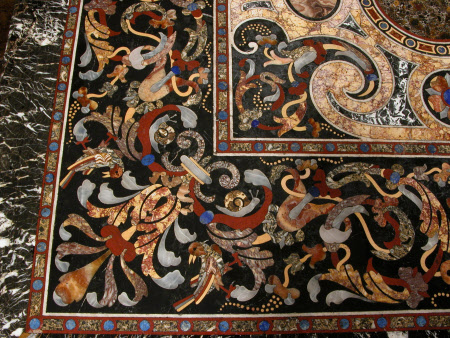 This rare and high-status feature table was purchased for Powis Castle in Wales and must have inspired awe and wonder. It is made of precious decorative stones set into an inventive design depicting birds, insects, flowers and foliage, and was produced in Italy around 1580. The table was never meant for dining, and not all visitors shared the host’s passion for this ornate piece of furniture. In the 1790s one guest commented that the sale of this Roman table could pay for ‘the purchase of a good English dining table’. The stones used for the tabletop were particularly valuable in their own right, and some may even derive from ancient archaeological sources, such as the Baths of Caracalla in Rome, which were excavated in the 1540s. By tradition, this table is said to have come from the Borghese Palace. It may have been acquired in Italy by George Herbert, 2nd Earl of Powis (1755–1801), during his grand tour of Italy.

A pietre dure and marble table top, Roman, circa 1580, atop a gilded and painted limewood base, Italian or French, circa 1580. The rectangular top with moulded edge and inlaid with hardstones depicting insects and flowers around large central roundels. Raised on an architectural base of arcades and fluted columns, supported by three pairs of gilded buttress-like monopedic trusses of creatures with lion or lioness masks, human torsos, and hairy paw feet.

Visiting Powis Castle in 1793, Lord Torrington suggested that the ‘inlaid Roman table’ should be sold, and the proceeds be ‘put towards the purchase of a good English dining table’. Torrington’s own taste aside, this monumental sixteenth-century work of art was not intended for dining but was designed as a centrepiece and evidence of its owner’s sophistication and taste. The table-top is inlaid with decorative hardstones (pietre dure) which were probably sourced from newly discovered archaeological sites such as the Baths of Caracalla, excavated from the 1540s. This connection with ancient Rome was important for the sixteenth-century patrons of these works of art, representing a legacy of the Eternal City and, crucially, their own wealth and power. The Powis table is one of a small group, including another in the National Trust collection at Charlecote Park (NT 532954), that seem to derive from similar designs and were possibly commissioned from the same Roman workshop. The central roundels on this table, and the Charlecote example, contain Tartaruga alabaster and Breccia di Tivoli marble, with borders of various stones including black-and-white Aquitanian marble which became increasingly rare during the Renaissance. Workshops in Rome specialised in technically dexterous decoration with polychrome hardstones forming mannerist patterns of birds, insects, flowers and foliate scrollwork. According to family tradition the table came from the Borghese Palace, Rome, sometime after the sixteenth century. There was certainly papal patronage for these expensive tables, a group of similar examples owned by Pope Julius III (1487-1555) was described by the architect and sculptor Bartolomeo Ammannati (1511-92) as ‘rare and wonderful things’ and such tables also appear in the inventories of Pope Sixtus V (1585-90). The table’s base is probably either French or Italian and is very rare in its own right. It is partly water gilded and painted to imitate porphyry, and the finely carved limewood lion and lioness monopodia, and the Ionic columns, retain most of their original 16th century gilding. The columns’ capitals are carved with upright pears, a most unusual feature which may relate the table to Pope Sixtus V (1521-1590), whose family name was Peretti (little pears).

Possibly acquired in Rome by Roger Palmer, Earl of Castlemaine (first cousin to William Herbert, 3rd Lord Powis and first Earl, Marquis and titular Duke of Powis (1634-1705), who conducted an embassy from King James II to Pope Innocent XI, after being appointed the King’s ambassador-extraordinary in 1685, and possibly delivered in 1704, along with a set of 12 marble busts of Caesars, from Powis House, London. Part of the indigenous collection of Powis Castle accepted in part satisfaction of the Estate duty after the death of the Right Honourable George Charles, 4th Earl of Powis, on 9th November 1952. The contract of the 'Offer of Property in Satisfaction of Estate Duty under the National Land Fund Scheme' was completed on 21st March 1963. Conveyed to National Trust ownership in 1992.