Adonis relinquishing Venus for the Hunt ('The Rokeby Venus and Adonis') 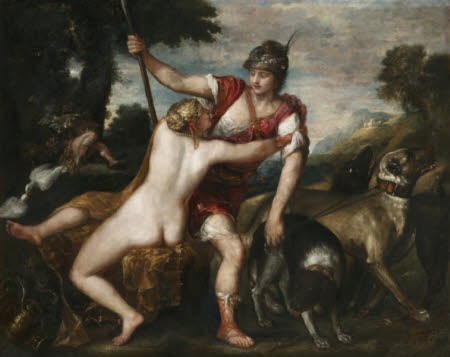 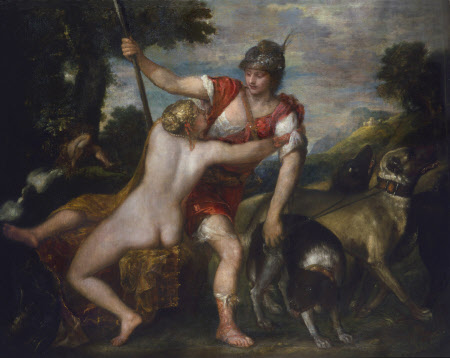 According to an episode in the Roman poet Ovid’s Metamorphoses (X, 519), Venus, the goddess of love, accidentally wounded by one of her son Cupid’s arrows, falls in love with Adonis, a handsome, but mortal, hunter. Because of her divinity she foresees his tragic fate. Here, wearing a helmet, he is geared up and ready to leave with his three keen dogs. Venus is trying in vain to hinder his departure, exemplified by the contorted twist of her naked body seen from behind (the composition inspired by antique relief sculpture). It is one of a group of pictures that Titian called poesie (poetry in paint) and of which he and his studio produced numerous versions: the Farnese type after a lost original of 1545/6 painted for Alessandro Farnese in Rome and the later Prado type which was originally acquired by Philip II of Spain in 1553/4. This is the latter, once owned by King Charles I, and may well be the prototype as X-rays have revealed his working method and many adjustments.

Oil painting on canvas, Adonis relinquishing Venus for the Hunt ('The Rokeby Venus and Adonis') by Titian (Pieve di Cadore 1488/90 - Venice 1576). 'Venus and Adonis’ was the most celebrated of the Poesie (Poetry pictures) that Titian painted for Philip II of Spain, which constituted the great achievement of his later career. Illustrating one of Ovid’s Metamorphoses, the artist departed from Ovid’s text in showing Adonis tearing himself away from Venus’s embrace to go hunting. (Shakespeare would later make the same departure from Ovid in his most successful poem of the same subject that was dedicated to the Earl of Southampton.) Titian’s composition instantly became one of the most famous pictures in Europe, leading the artist and his studio to produce several versions with variations. The Cobbe version is of particular interest because x-radiography shows that Titian worked out on this canvas many details, such as the angle of Adonis’s head, that were then put to use on Philip II’s version in 1553. Titian continued working on the Cobbe canvas throughout his life making multiple adjustments to limbs, draperies and landscape, trying out or recording variant details that successively appeared on other versions. The Cobbe canvas is almost certainly identical with the Titian Venus and Adonis in the collection of King Charles I at Whitehall Palace, and was subsequently at Rokeby Hall, Yorkshire.