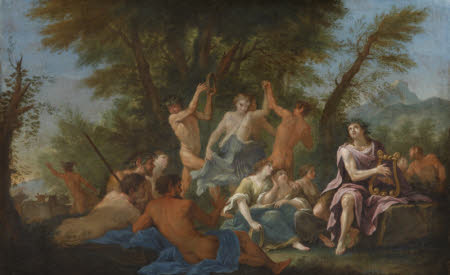 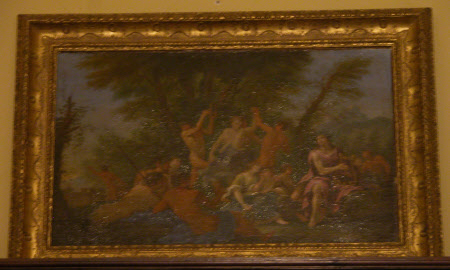 Oil painting on canvas, Apollo with Nymphs and Satyrs and Mercury stealing the Cattle of Admetus by Filippo Lauri (Rome 1623 – Rome 1694), signed with the artist's monogram at lower left, on the stone slab on which the two satyrs are reclining, FL. Another autograph version of this composition was in the collection of Sir Brinsley Ford, London and engraved by William Byrne (1743 - 1805). The mythological subject depicted is taken from Ovid's Metamorphoses (2:678-709). As a punishment for killing the Cyclopes, Apollo was sent by Jupiter to serve King Admetus as a shepherd. However, after receiving the gift of a lyre from Mercury, he became distracted from his duties as herdsman and failed to notice Mercury stealing the Kings's cattle, shown in the left background.