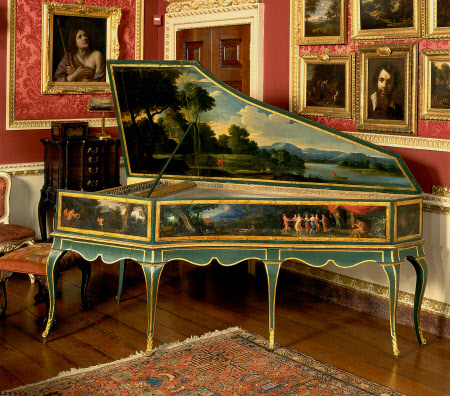 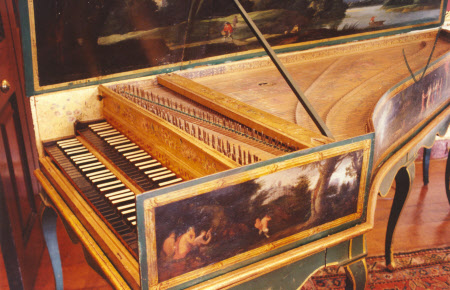 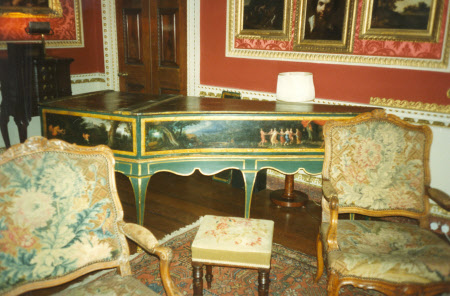 The Ruckers were a dynasty of Flemish harpsichord makers whose instruments attained the highest reputation of any makers before or since. In the 17th and 18th centuries, Ruckers instruments were so highly valued that they were adapted to keep up with the expanding range of notes of subsequent eras, rather than replaced. This harpsichord was sensitively enlarged by Henri Hemsch in Paris in the mid-eighteenth century, a time when the values of Ruckers harpsichords had reached phenomenal levels.

A harpsichord built in 1636 by Andreas Ruckers of Antwerp. He was the second son of Hans Ruckers, and the family , over three generations, were the greatest of all harpsichord makers. Painted with its original 17th century landscape on the inside lid, attributable to Jan Wildens. Adapted and enlarged in 1763 by the master maker Henri Hemsch, a Fleming working in Paris, when its external decoration was revised with mythological scenes on the lid and sides after compositions by Titian and Poussin etc. The decoration incorporates an, as yet, unidentified coat of arms. Green and gold borders to the painted panels. Six legs. Believed to have been a possession of the Savoy family until the 1900's.

Believed to have belonged to the Savoy family. Recorded in 1883 by E. van der Straeten for Hipkins. Noted in 1971 by the Comtesse de Chambure in the possession of Dr, Stefanovitch, Menton, France. Acquired after 1971 by the Comtesse de Chambure, on behalf of the French national collections, to be swapped with Michael Thomas in return for his harpsichord of 1779 by Sebastian Erard. Acquired from Michael Thomas by Alec Cobbe 1989-1992. (From the Cobbe Collection Instruments guidebook).

Coat of arms of the Savoy family