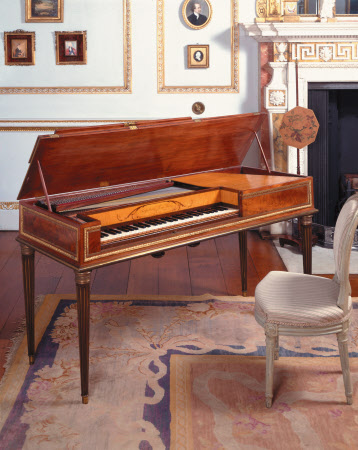 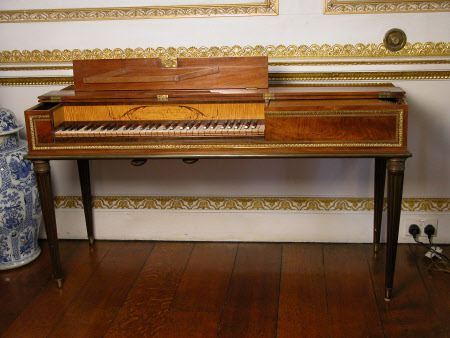 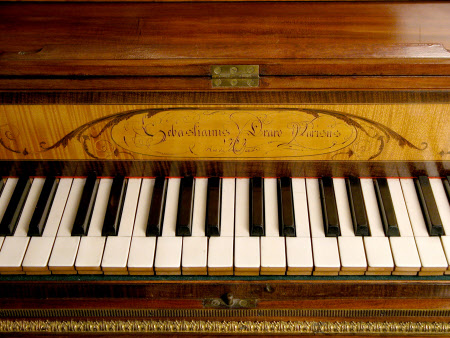 The most beautiful 18th-century Erard pianoforte survive today. It was made by Sebastien Erard in 1786-7 who was given a special Royal Priviledge in 1785 and according to his niece (and ultimate heir) the instrument was made for Queen Marie Antoinette. This is borne out by the exceptional quality of the cabinet work which is unmatched by any other surviving 18th-century Erard instrument. Having made instruments for the Queen and other French royalty Erard was forced to move to London to escape the revolution, leaving his Paris factory in the charge of his brother. The instrument itself was brought to England by William Waldorf Astor around 1902 It was given to the Cobbe Collection Trust by Alec Cobbe and Renée Lady Iliffe in 1997.

A Louis XVI mahogany square pianoforte, by Sebastian Erard, Paris, 1787. According to the maker’s niece, whose husband, Pierre Erard, had been Sebastien’s partner for decades, the instrument was made for Queen Marie Antoinette. The exceptional quality of the cabinet work bears this out and no other Erard instrument of matching quality survives from the eighteenth century. The sycamore nameboard is signed on an oval panel 'Sebastianus Erard Parisiis 1787, Rue du Mail N. 37', the soundboard signed 'Sebastien Erard a Paris 1786', the case is of well-figured mahogany with panels of foliate ormolu border, framed by ribbed brass bands, on tapering legs with brass flutes. On the underside is an exhibition label of the late nineteenth century inscribed 'Histoire du Travail Section II Musique: Piano de la Reine Marie Antoinette de Sebastien Erard 1787 (Collection Erard)'.

Sebastien Erard is known to have supplied a piano to the Queen in 1786. According to an Erard family tradition originating from the maker’s closest relatives and heirs, this instrument was made for Queen Marie Antoinette and purchased back by Sebastien Erard in the Revolutionary sales; thereafter in the Erard family collections; exhibited at the South Kensington Museum, 1872, lent by Sebastien Erard’s niece; exhibited in Paris, 1900; purchased from the Erard Collection by William Waldorf Astor circa 1902/03 for 30,000 francs; by descent to Lord Astor of Hever, Hever Castle, Kent; Hon. Gavin Astor sale, Christie's 15th July 1971, lot 68 (1100 gns. to Berendt); bought from Berendt by Alec Cobbe and Renée Lady Iliffe 1982; exhibited at the Fitzwilliam Museum, 1983 (No. 6). (From the Cobbe Collection Instruments guidebook).