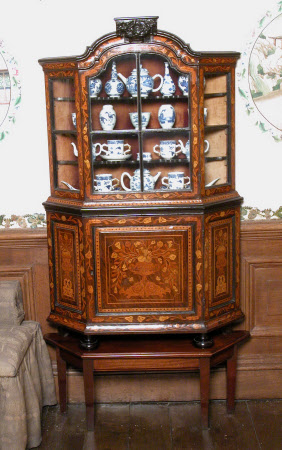 A small walnut, marquetry and ebonized wood display cabinet, Dutch, mid-19th century, raised on an associated and later mahogany stand [NT 1146988.2]. The upper section topped by a moulded cornice centred by a carved foliate corbel and fitted with a glazed door, between glazed sides, enclosing three painted shaped shelves. The lower section of a panelled door enclosing a shelf, and with panelled sides, with base moulding and ebonised front bun feet and rear bracket feet. Inlaid throughout with bunches and sprays of marquetry flowers and leaves.