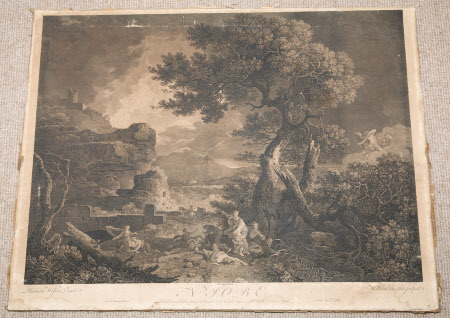 Engraving and etching on paper

Wilson exhibited a second painted version of The Destruction of Niobe (now in Yale Center for Brish Art) at the first Society of Artists exhibition in 1760 and William Woollett was commissioned by John Boydell to engrave the composition. It was commissioned along with three other celebrated landscapes from the exhibition and one of Boydell's first forays into contemporary fine art publishing. Woollett was offered the unprecedented fee of 100 guineas for it and a further two payments of £25 as the complexity for the engraving became apparent. The print was exhibited at the 'Free Society' in 1762 and praised by John Lockman in a poem in the Public Adverstiser (5 November). Niobe brought profits of £2,000, unprecedented for an engraving after a landscape by a British artist and it sold especially well in France.

Engraving and etching on paper, Niobe (after Richard Wilson) by William Woolett (Maidstone 1735 – London 1785), 1761. An unframed print (on a stretcher), titled Niobe, artist Richard Wilson, engraver William Woollett. Marked 'Dunster' on reverse. Niobe, Queen of Thebes had seven sons and seven daughters and thought she was more fit to be worshiped than the goddess Latona (Leto) who only had two children, Apollo and Diana. The goddess commanded her children to slaughter those of Niobe, who wept until she turned to stone. The story is related in the Roman poet Ovid's Metamorphoses VI:144-312 and is a famous group of Antique sculptures in the Villa Medici, Rome which Wilson sketched there in 1752. He painted two versions of the subject, one in Rome for the 3rd Duke of Bridgewater and is thought to be the prime version in a private collection. Another version he exhibited at the Society of Artists in 1760 and this version, bought by William Augustus, Duke of Cumberland (1721 - 1765), uncle of George III and owned by his nephew, William Henry, Duke of Gloucester (1743 - 1805) and subsequently Wynn Ellis (1790 - 1875) is now in the Paul Mellon Collection, Yale Center for British Art.