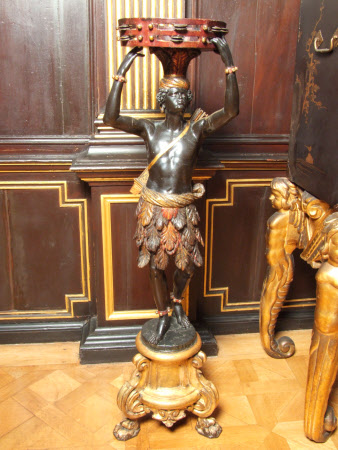 A torchère, one of a pair, painted and gilt softwood, in the form of a man, British School, probably made in England, in around 1675 (before 1677). The ebonised figures wear feathered skirts painted red and gilt, anklets and bracelets with gilt bells, gilt turbans, and gilt quivers containing arrows slung across the torso. Surmounting the turbans are capitals, richly carved with acanthus, painted and gilt. Balanced on top of the capitals are large trays in the form of tambourines, painted and gilt. The figures’ arms are aloft, their hands gently supporting the tambourines. The figures mounted on circular pedestals carved with baroque scrolls, on paw feet, the whole gilt.

This pair of torchères is identified in the Ham House inventory of 1677 as the ‘Two Indean stands’ in the Great Dining Room (now the Round Gallery), and in the 1683 inventory as ‘Two blackamore stands’. They were presumably acquired by Elizabeth Maitland (nee Murray), Duchess of Lauderdale and 2nd Countess of Dysart (1626-98). Both stands were re-gilded and redecorated by the cabinet-maker George Nix circa 1729-30 (bill to the 4th Earl of Dysart ‘For new Gilding & Japanning 2 fine Indian Figures…£4’). Their maker is unknown, but furniture historian Adam Bowett has pointed out that whilst 'it is usual to state that blackamoor stands were 'Venetian', and although many were apparently made in Venice in the nineteenth century, there is no reason to suppose that [the pair at Ham] are anything other than English.' The figures derive from a European aesthetic tradition known as the ‘blackamoor’, a conflation of the Black African and Muslim ‘Moor’. The motif has existed in European decorative art since the medieval period but developed into a recognisable type in Italy, chiefly Venice, in the 17th century. In England, as early as 1638 Sir Henry Slingsby had 'a blackamore cast in led [sic] holding in either hand a candlestick to set a candle to give light to ye staircase'. In art the ‘blackamoor’ is usually a representation of a Black African in exotic and orientalised costume, here a feathered skirt and turban. Highly stylised and entirely imaginary, their identities combine various stereotypes from the ‘non-European’ – i.e. African, Asian, and occasionally Native American – ‘other’. The motif is found across western material culture from ceramics to silverware, heraldry to jewellery, furniture to sculpture, architecture, painting and print (e.g. NT 413922, 452977, 936871, 118826, 129512, 802613, 1139940). As in this example, the ‘blackamoor’ was often posed in service, literally functioning as a tray, box or clock holder, a torchère, or as a motif carved into the supportive elements of furniture. The ornamental ‘blackamoor’ belongs to a range of objects marketed in Europe to signify colonial prosperity, which, from the 17th century, became increasingly dependent on the Transatlantic slave trade. Such figures were designed in European workshops for elite domestic settings and were displayed with other luxury goods purchased, imported, and collected from across the globe. The Duchess of Lauderdale's second husband John Maitland (1616-82) was a powerful figure in Charles II’s inner cabinet. In 1663, Lauderdale was a signatory to the Royal charter founding the Royal English Merchant Adventurers Company Trading to Africa, (later the Royal African Company) which had a monopoly on the trading of ivory, gold and slaves along the west coast of Africa. Lauderdale held official positions which connected him closely to trade and early colonialism, including Commissioner of the Council of Trade (from 1668), Commissioner of the Council of Plantations (from 1671) and when founded in 1675, one of the Lords of Trade and Plantations. For comparable figures see Knole (NT 129512), a Venetian or possibly English pair from the same period, with tambourines. A similar candlestand was exhibited in ‘Baroque, Style in the Age of Magnificence’, Victoria & Albert Museum, London, 2009 (cat.no. 156).