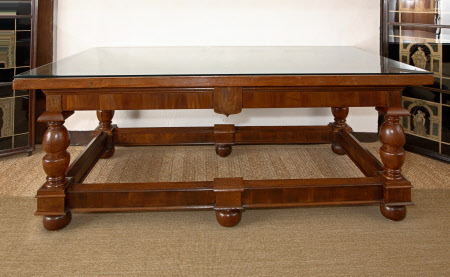 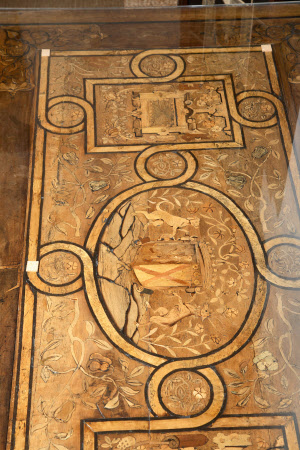 The top of pearwood, inlaid with various woods, probably including sycamore and fruitwoods; the original border of inlaid oak, laburnum and fruitwood; the later base and outer border of oak and walnut

A pearwood, oak and inlaid table-top, English, probably London, circa 1570, possibly identifiable with the 'inlayde borde' listed in Bess of Hardwick's Withdrawing Chamber in the 1601 inventory, or the 'inlayde table in the window' in the High Great Chamber. This rare marquetry-inlaid table-top (now on a later base and with a later outer border to the top) is related to two other important inlaid tables at Hardwick Hall: the famous 'Aeglentyne' table (NT 1127774) and a gaming table (NT 1127740). Indeed, this may have derived from the same workshop as the former, suggesting that it might date from circa 1570. The top bears the coat of arms of TALBOT, 'Gules, a lion rampant with a border engraled or' impaling HARDWICK, 'Argent, a saltire engrailed azure on a chief of the second three roses of the first', and the table is therefore dateable to the time of Bess' last marriage to George Talbot, 6th Earl of Shrewsbury, which began in 1568 and ended in 1590 on the Earl's death. The pearwood top is inlaid with bold strapwork, foliate scrolls, fruit and flowers, the coat of arms, and saltires in rectangles. The original oak border is inlaid on a laburnum ground with an 'E' and an 'S', for Elizabeth Shrewsbury; the corners with foliated scrolls inlaid on fruitwood ground. The later base of oak, the stretchers and the friezes veneered, each long frieze mounted with a shield. On four legs turned as cup and covers, united by stretchers, and on ball feet. Interestingly, this table has an apparently contemporary inscription, including the word 'Hackthorne', and two or possibly more illegible words in secretary hand, to the underside of the boards to the top. Probably originally destined for Chatsworth.

Possibly the 'inlayde borde' mentioned in the 1601 inventory of Hardwick Hall as in Bess' Withdrawing Chamber. Thence by descent until, following the death of Edward William Spencer Cavendish, 10th Duke of Devonshire (1895 - 1950), Hardwick Hall and its contents were accepted by HM Treasury in part payment of death duties and transferred to the National Trust, in 1959.

Centre of top: An armorial achievement, TALBOT impaling CAVENDISH To border of top: The initials of Elizabeth, Countess of Shrewsbury 'ES' Underside of top: 'Hackthorne', followed by two (or possibly more) words in secretary hand