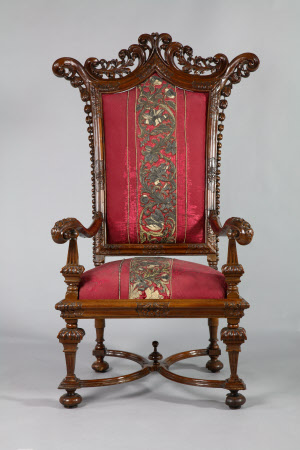 One open armchair, of a pair of carved walnut and upholstered high-backed open armchairs, London, c. 1697 - 1702, attributed to Thomas Roberts (fl. 1684 - 1714), ensuite with five stools [NT 1127754.1 - 5]. Another example, believed to be a copy made by the 6th Duke of Devonshire (1790 - 1858) - is NT 1127485. Having a rectangular padded back topped by a pointed arch in a moulded surround enriched with foliated scrolls and projecting at the top corners in bold volutes, flanking pierced foliate scrolls, and issuing diminishing pendants of husks, the moulded arms with scroll terminals and raised on broadening square-section fluted supports on gadrooned square blocks, the moulded seat rails carved at the corners and centres with sprays of foliated scrolls and raised on turned rear supports, the tapering front legs opposing the arm supports above, all united by a curving 'X'-form stretcher centred by a turned spire finial, and on four bun feet. The back panel and seat upholstered in original red velvet, embellished with a central band of scrolling foliage in appliqued metal thread. These extraordinary chairs are attributed to Thomas Roberts, Royal Chairmaker between 1686 and 1713, who supplied the great majority of seat furniture, bed frames and other miscellaneous items to the Royal Palaces in the reigns of James II, William & Mary, William III and Queen Anne. He worked from a premises known as 'The Royal Chair' in Marylebone Street, Westminster until his death in 1714. Influenced by French fashions, they represent a new departure, having removable seats and backs and a new 'cross-frame', or 'cross-stretcher' uniting the legs. The latter design was known in France, and in Holland from the late 1680s, but the 'cross frame' is first referred to in England in a bill of Roberts of 1694, for a chair supplied to Whitehall Palace and described as 'one elbow chair carved rich made of a new fashion with a cross frame and false back and seat with a handsome rail carved on top of the back...Japanned black'. This pair of chairs at Hardwick Hall, although undocumented, are the earliest known chairs resembling the description in Roberts' bill of 1694, and may have been supplied for the Duke of Devonshire c. 1697, possibly to accompany the state bed made for Chatsworth by Francis Lapierre. Their upholstery - which is original - certainly complements the red and silver silk which covers the surviving fragments of the bed. The attribution is not certain, however, and it is possible that they relate to a bill for other seat furniture supplied by Roberts in 1702. The decoration on the moulded back and seat rails - reserves of shallow foliate carving separated by lengths of plain moulding - is to be found on other seat furniture thought to have been supplied by Roberts [see, for instance, NT 1127752]. In addition, the distinctive splay to the back is described in another of Roberts's bills of 1696, 'for a large handsome chair of State the back made to spread out and the Elbowes to turn on the corner' supplied to one of the Royal Palaces. It has even been suggested, in an alternative account of their early provenance, that the similarity of the Hardwick chairs to this description could mean that they were originally supplied to a Royal Palace, and acquired by the Duke of Devonshire at a later date as perquisites. They are also notable in the design of the legs, which are conceived as square pillars, inversely tapered and stop-fluted, with spreading gadrooned capitals, a fashion which was probably adopted in England only shortly before these chairs were made.

Believed to have been supplied by Thomas Roberts circa 1697, to accompany the State Bed made for Chatsworth by Francois Lapierre, or possibly relating to a bill of Roberts of 1702. An alternative view is that they were made for a Royal Palace, and acquired by the Duke of Devonshire as a later perquisite. Either way, the chairs were brought to Hardwick Hall from Chatsworth by the 6th Duke of Devonshire circa 1820, and originally placed in the High Great Chamber. They are shown beneath Lapierre's canopy in the Long Gallery in a Country Life photograph of 1928 [Image Number 505936]. Thence by descent until, following the death of Edward William Spencer Cavendish, 10th Duke of Devonshire (1895 - 1950), Hardwick Hall and its contents were accepted by HM Treasury in part payment of death duties and transferred to the National Trust, in 1959.