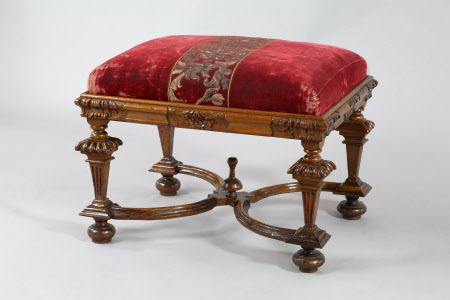 One stool from a set of five carved walnut and upholstered stools, English, circa 1697, attributed to Thomas Roberts (fl. 1686 - 1714), ensuite with a pair of high-backed open armchairs [NT 1127755.1 - 2] and another open armchair - believed to be a copy commissioned by the 6th Duke of Devonshire (1790 - 1858) [NT 1127485]. This set of stools are attributed to Thomas Roberts, Royal 'Chairmaker' between 1686 and 1713, who supplied the great majority of seat furniture, bed frames and other miscellaneous items to the Royal Palaces in the reigns of James II, William & Mary, William III and Queen Anne. He worked from a premises known as 'The Royal Chair' in Marylebone Street, Westminster until his death in 1714. The 'cross-frames', or 'cross-stretchers' to both the chairs and the stools derive from France, and were a new departure in England. The 'cross-frame' is first referred to in England in a bill of Roberts of 1694, for a chair supplied to Whitehall Palace and described as 'one elbow chair carved rich made of a new fashion with a cross frame and false back and seat with a handsome rail carved on top of the back...Japanned black'. The decoration on the moulded back and seat rails of the pair of chairs, and to the seat rails of these stools - reserves of shallow foliate carving separated by lengths of plain moulding - is to be found on other seat furniture thought to have been supplied by Roberts [see, for instance, NT 1127752]. In addition, the distinctive splay to the back of the chairs is described in another of Roberts's bills of 1696, 'for a large handsome chair of State the back made to spread out and the Elbowes to turn on the corner' supplied to one of the Royal Palaces. It has even been suggested, in an alternative account of their early provenance, that the similarity of the Hardwick chairs to this description could mean that they were originally supplied to a Royal Palace, and acquired by the Duke of Devonshire at a later date as perquisites. Whether or not they were commissioned by the Crown of by the Earl of Devonshire, the pair of chairs which are ensuite with these stools, although undocumented, are the earliest known chairs resembling the description in Roberts' bill of 1694, and are thought to have been supplied for the Duke of Devonshire c. 1697, possibly to accompany the state bed made for Chatsworth by Francis Lapierre. Their upholstery - which is original - certainly complements the red and silver silk which covers the surviving fragments of the bed. The stools themselves are undocumented, but so closely match the chairs in terms of design and upholstery - which is original - that they must have been part of the same commission.