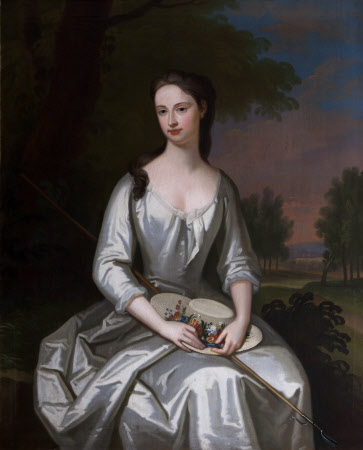 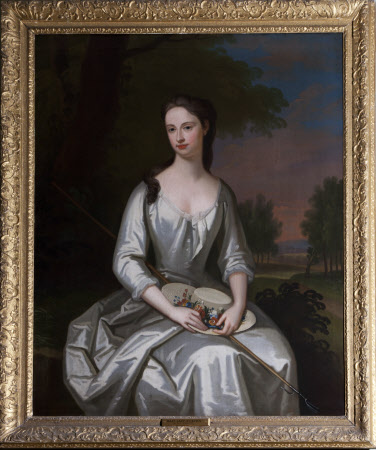 Oil painting on canvas, Mary Assheton, Lady Curzon (1695-1776) in the manner of John Verelst (fl 1698 - London 1734) and Maria Verelst (Vienna 1680 - London 1744). A three-quarter-length portrait of a young woman, seated under a tree facing, head inclined to the left, gazing at the spectator, dressed in white satin and holding a flowered hat in her lap with both hands. Under her right arm and lying across her lap is a shepherd's crook. Landscape setting to right with trees and distant horizon. Mary Assheton was the second of three daughters of Sir Ralph Assheton of Middleton. Her marriage to Sir Nathaniel Curzon, 4th Bt produced two surviving sons, Nathaniel, later lst Baron Scarsdale; and Assheton, later lst Viscount Curzon, from whom the Earls Howe and Barons de la Zouche descend. She is shown as a shepherdess, a common conceit in the poetry and painting of the period.

; bought with part of the contents of Kedleston with the aid of the National Heritage Memorial Fund in 1987, when the house and park were given to the National Trust by Francis Curzon, 3rd Viscount Scarsdale (1924-2000)