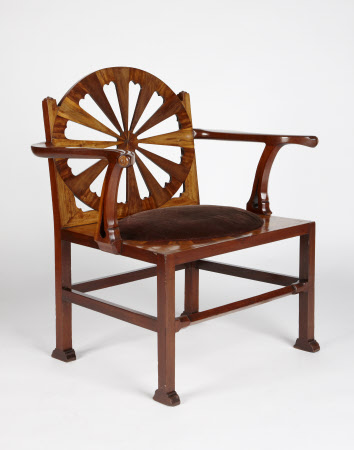 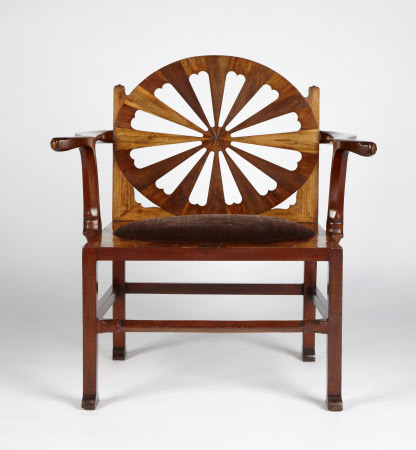 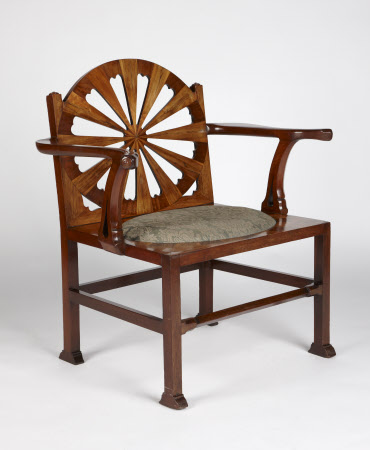 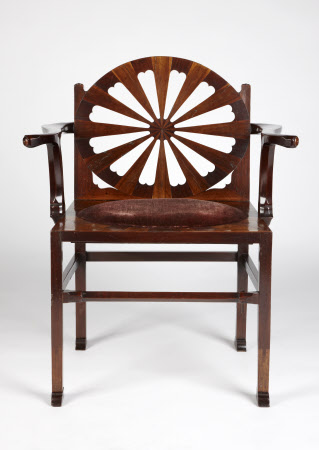 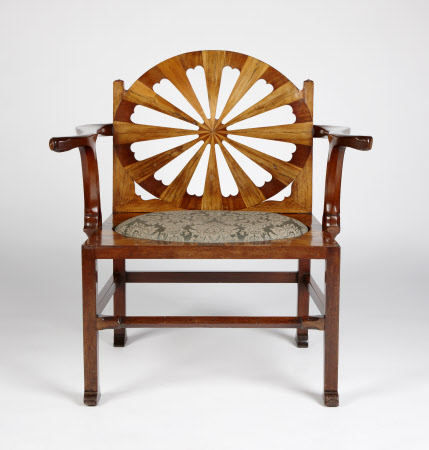 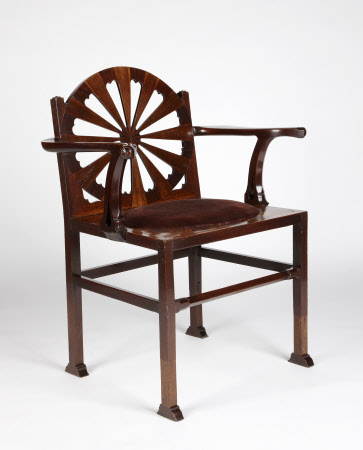 A set of seven mahogany and olive wheel-back hall chairs, English, possibly Derbyshire, circa 1760-70. The oval wheel back pierced with radiating devices veneered with alternate mahogany and olive spokes with shaped out swept arms held by pierced sabre supports, the seat with a padded drop in cushion raised on square section legs with stretchers. The front stretcher faceted, one chair with heightened legs, chair cushions later, covered in damask, some in velvet, originally probably with caned drop in panels.

There are many variations of this form of hall armchair. The Kedleston chairs are illustrated in J. Cornforth, 'Recreating Adam', Country life, 12 January 1995, page 43; see also Kedleston Hall The Historic Derbyshire home of the Curzon family, Derbyshire Countryside Ltd., 1977, pp. 4 and 5 for illustrations of four of them in the Music Room. There is a second set of six chairs at Kedleston (NT108617) with a pierced splat back, these are almost certainly by the same maker and of a similar date. All the chairs have padded seats (possibly once caned drop in panels) and are raised on straight legs joined by stretchers. They also all have the pierced sabre arm supports and outswept arms. A related set of four armchairs was sold by the Rt. Hon. the Earl Poulett, Hinton House, Somerset, Sotheby's, London, November 1, 1968, lot 54 and again, November 12, 1977, lot 110. These had similar backrests to the wheel back examples but the seats were caned, had straight legs joined by stretchers, the front and back legs joined by ground stretchers. An elaborate example from the collection of the Fogg Art Museum and Busch-Reisinger Museum, Harvard University, was sold at Sotheby’s, October 16-17, 1987, lot 131; another sold, February 17, 1979, lot 161; a pair was sold, Christie's, London, April 15, 1999, lot 42, and a very similar pair of hall armchairs, but without the inlay to the backs, was sold, Christie's, New York, April 15, 2005, lot 219, these examples had X frame legs and arms supports. James Weedon (May 2018)